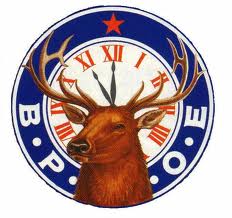 The Mt. Carmel Elks Lodge #715 had its beginnings on January 15, 1901, when it was granted dispensation for a Lodge to be known as Mt. Carmel, Illinois Lodge #715. On August 14, 1902, 20 men became charter members of the Mt. Carmel Lodge. Today there are 389 members, with membership open for men and women. There are 2,000 lodges in the nation with more than 850,000 members. Marge Dallas became the current Exalted Ruler in April 2014, succeeding Charles Acree who had served in that office since 2009. The Lodge opens at 3:30 p.m. Monday – Saturday, with evening dining offered on Tuesdays, Thursdays, Fridays, and Saturdays.

The principles of Charity, Fidelity, Justice, and Brotherly Love are exemplified in a multitude of activities which the Elks sponsor each year at the local, state, and national level. Elks continue to show that Elks Care – Elks Share!  Many opportunities are offered for our community through the grants made available through the Elks National Foundation. A few years ago the Mt. Carmel Lodge was second in the nation per capita per member in donations to the National Foundation, and in 2012-13 was the leading Lodge in Illinois in donations to the National Foundation.   The Foundation helps build stronger communities by investing in communities where Elks live and work; providing tomorrow’s leaders, our youth, with lifelong skills; honoring the Elks’ pledge to never forget our veterans; helping the state Elks associations accomplish their charitable objectives; and funding Lodge projects that improve the quality of life in local Elks communities. Many local students have benefited from the Elks National Most Valuable Student and Legacy Scholarships through the years. The Elks National Foundation awards $3.74 million each year in scholarships. Local projects/activities of the Elks are the Flag Day Ceremony, Veterans Programs, Americanism Essay Contest, Drug Awareness Program, Easter Bunny Program, Hoop Shoot Contest, and the Children’s Care Corporation. Mt. Carmel Lodge #715 is proud to be a part of the Illinois Lodges who contributed $295,625 to the Children’s Care Corporation last year. About $186,000 was awarded in scholarships to 115 Physical Therapy and Occupational Therapy students. More than $400,000 was spent that year assisting children’s needs and scholarships. Free Children’s Care Clinics are sponsored across the nation, with the Wabash General Hospital Orthopedic Clinic hosting four of those clinics in 2015. Officers of the local Lodge have joined with other Elks at the State meetings to assemble care packages for Illinois soldiers overseas.

The Mt. Carmel Elks Lodge proudly continues to sponsor the local Hoop Shoot Contest. The Hoop Shoot Contest is the largest coeducational sports program in the country, which draws more than 350,000 participants annually.

The Mt. Carmel Lodge is pleased to join in striving to carry out the Elks motto: “ELKS CARE-ELKS SHARE!”